Read more
As a painter Ingeborg Stana is in good company. There are a number of painters of her generation on the Norwegian art scene, including Thorbjørn Sørensen, Mari Slaattelid, Harald Fenn, Vibeke Slyngstad, Frank Brunner, Astrid Nondal, Morten Slettemeås and Dag Erik Elgin, to mention just a few.

Along with these artists – but in her own way – Stana maintains a long and unbroken tradition within Norwegian art. It may be stating the obvious, but it is a necessary point to make, because when one talks about painting the discussion invariable turns to the alleged death of this artistic medium; a rumour that has clearly shown itself to be exaggerated, if at all true. Painting has merely receded into the shadows, existing in parallel with other artistic mediums such as video, photography and installation art, to mention but three. The 1980s in particular – the decade that saw the rise of the intensity and forcefulness of Neo-Expressionism – reinvigorated painting as a medium.

Despite being part of an artistic trajectory in Norwegian art, some aspects of Stana’s artistic practice distinctly separate her from many of her contemporaries. She is a pure painter, a classical artist within the realm of painting with a consistent array of motifs. What we are faced with – both here and in earlier works – are paintings in the conventional sense, created with a brush and palette; oil on canvas. Her use of airbrushing techniques or materials such as chipboard, aluminium or Plexiglas does not break with the painterly tradition. We are not dealing with painting in the expanded field, as it were.

We can also trace this exploration of painterly traditions and the expansion of this medium’s field in the work of other artists such as Thorbjørn Sørensen, who has used the airbrushing technique on aluminium plates and in relation to putty on chipboard. Another associated practitioner is Mari Slaattelid. She explores the potential of painting through her use of photography, plexiglass, steel and car paint. I mention these examples to illustrate how challenging and expansive the field of painting has shown itself to be. In Stana’s work we can note an approach to painting that easily engages with tradition, or rather: the traditional. However, within this easy relationship lies an artistic desire to challenge conventions.

Stana has previously stated that she is inquisitive about natural beauty. But when she makes such a statement and we see her works, she makes it hard for us. Both the older and more recent works are, in a sense, fragments and constructions. We could say that there are elements of realism in these paintings, but that the level of naturalism is far from notable.

A striking feature of the later works is how the earth manifests itself. The artist has – for a moment – fixed her gaze downwards. As viewers we find ourselves on a high point, looking down on and across a landscape. It is close enough to make out the contours of fields and forests, but simultaneously sufficiently removed, so that we can see the earth’s curve on the horizon. A nascent sense of vertigo makes itself felt due to the difficulty of focussing the gaze on any particular point.

There is another aspect that thwarts the perception of natural beauty in Stana’s paintings. A prominent feature of her work is the depiction of nature. It is either represented as pure nature, an approach that can be seen in her later works, or as natural phenomena, more accurately: atmospheric conditions. What undermines a reading of natural beauty in these works is that there is no element of culture – nothing manmade – that can highlight the established dichotomy between the two, or create a sense of nature as something sublime.

The lines of the paintings

There is nothing in Stana’s paintings that clearly evokes 19th century landscape painting, of the kind where a tiny human is juxtaposed with the powerful forces of nature. Just think of I.C. Dahl’s ”From Stalheim” or Thomas Fearnley’s ”The Labro Waterfall”. In many ways, Stana’s approach is closer to that of August Cappelen in his depictions of the dying virgin forest at Holla by Ulefoss.

What gradually becomes apparent is how Stana draws on different strategies and compositional forms from art historical predecessors. In the later works, we can note her use of a low horizon, characteristic of Dutch 17th century painters such as Jacob van Ruisdael. The distorted perspective evokes pre-Renaissance painting. It is reminiscent of value-based perspective, where in spaces that contained many figures the more important ones were depicted as larger, while the less important – the extras as it were – were rendered considerably smaller.

The absence of sight lines is also quite striking. The eye of the beholder cannot find a natural point – a repoussoir – that can lead the gaze into the painting. The static and painterly surface establishes a visual dynamic in the image.

With Stana’s cloud paintings, we can draw a line back to Hans Gude. It was Gude who painted the landscapes when he collaborated Adolph Tidemand, and he was exceptionally adept at painting clouds and depicting different atmospheric conditions. He was – accurately – referred to as der Luftdoktor. Another other line that can be drawn from the cloud paintings relates to their ability to capture the atmosphere, which links them to the Impressionists.

The visual dynamism found in Stana’s other works is also present in the cloud paintings. There are no clear or obvious fixed points of reference in the surface, but instead the paintings capture a fascinating form of stillness, one that, paradoxically, is in constant movement. The clouds are never the same and, therefore, everything becomes altered. The cloud paintings are, as such, action painting.

Ingeborg Stana is on her way down. In some cases she is right at the bottom. She lies on her back, gazing up at the treetops and the bright sky. What separates the older cloud paintings from the new ones? Is there any difference at all? Yes and no. There are still clouds, skies and light, in short, atmospheric conditions. The difference lies in the landscape as a point of reference; we have something to fix our gaze onto. However, it is not a specific landscape we find ourselves above or even near. Moreover, there are distortions that make it hard to determine our own location. The downward curve of the horizon suggests that we are far away, but the fields and the trees indicate that we are close. This ambiguity is created by a conscious distortion of the perspective.

There is something fascinating about Stana’s images. One facet of this is derived from her relatively monomaniacal approach, as seen in her emphasis on cloud motifs. The other consists of two features, and both contribute to making the work so compelling: the paintings possess both visual and intellectual qualities. On the one hand, they are beautiful to look at. On the other, they reveal intellectual qualities in her conscious invocation of the history and traditions of painting, and the works contain different layers of reference to both artists and artistic movements. Stana’s works are, in short, both art as art and art about art. This essay was published in the catalogue "INGEBORG STANA" on the occasion of Stana's exhibitions at the GAD, OSLO in 2011. Translated by Natalie O´Donnell. 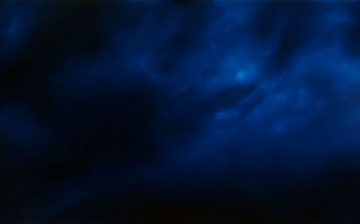